See our network on NewEuropeans.net

Without freedom of movement, who will pick the fruit?

Reports of daffodils left unpicked in the fields at the Varfell Farms in Cornwall reflect many of the challenges that farmers across the country face, write Associate Professor Roxana Barbulescu (Trustee of New Europeans UK), Professor Carlos Varga-Silva and Dr Bethany Robertson.

Republished with kind permission from UK in a Changing Europe. The flower farm employs hundreds of seasonal migrant workers that traditionally come from Eastern Europe. With the end of freedom of movement, the farm is no longer able to recruit freely from the EU.

This, and similar cases across the UK, raise the question of how the demand for a seasonal agricultural workforce, a sector that is traditionally dependent on EU migrant workers (over 90%), will be met now that freedom of movement for workers has ended following Brexit.

The first possible solution is the introduction of a new Seasonal Workers Pilot. There is debate about the size of actual demand for seasonal workers in the UK – industry estimates the required workforce at 75,000 and DEFRA puts that number at about 50,000 – but there is consensus that the pilot does not meet the current labour demand and works in conjunction with other possible responses.

These include increasing recruitment from the domestic workforce, increasing automation, and increasing food imports.

The UK launched the Seasonal Workers Pilot in 2019 to enable the recruitment of non-EU migrants for seasonal horticultural work, to help offset a labour shortage brought about by the end of freedom of movement in December 2020.

One possible argument against a new seasonal migration scheme is that there has been historical opposition to migration in the UK, and it has been argued that migration was one the main drivers of the Brexit vote.

However, the evidence suggests that there is less opposition to seasonal migration compared to other types of low skilled migration. 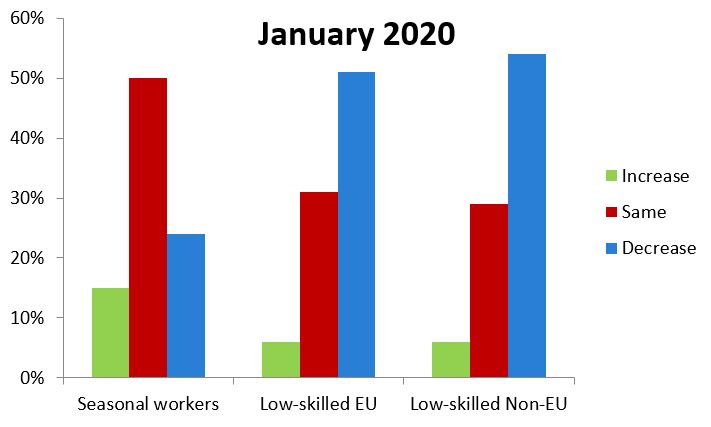 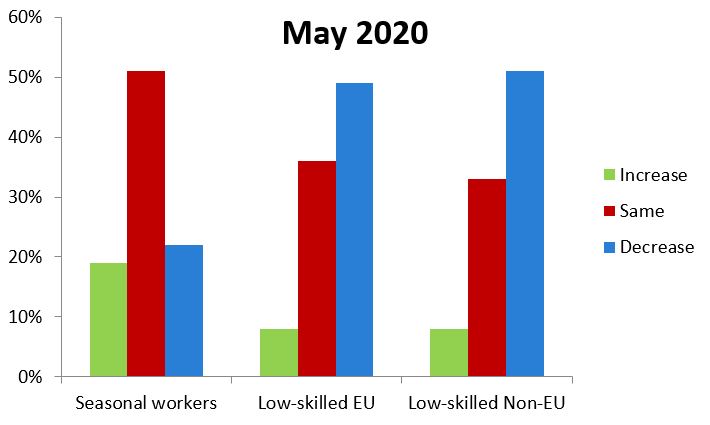 What does the new pilot entail for workers? In the scheme, migrant workers must pay the visa fee of £244 and demonstrate £1,270 in savings.

Visa fees, time to procure the visa, trips to the consulate and even the requirement to have a valid passport are all hurdles that EU migrants did not face while the UK was a member of the EU, and for short period after Brexit when freedom of movement rules still applied.

Furthermore, migrant workers coming to the UK under these visas have fewer rights than seasonal workers who were recruited under freedom of movement. For example, they cannot change jobs, take on a second job, or move to a permanent job on the same farm.

They also cannot bring family members with them to the UK, nor can they have recourse to public funds. While UK continues to attract migrants, those arriving via the Pilot are more likely to come from non-EU countries and farmers will need to complement the Pilot with other solutions.

Increasing recruitment from the domestic workforce

In a previous contribution, we discussed the challenges in attracting domestic workers: the physically demanding nature of the work, working outdoors in all weathers, the fact that workers often have to travel long distances to reach the farms, and workers have alternative local and non-seasonal employment available such as in hospitality or supermarkets.

Furthermore, farms want workers who will stay for the season, and not move on once Covid-19 lockdowns ease in June when it is high picking season. Thus, these recruitment campaigns, and others like it, have had limited success.

Elsewhere, ministers have suggested that it is possible to reform the benefits system in order to encourage the unemployed to re-enter work and, in particular, work in agriculture.

However, it is difficult to say whether there is real political appetite for such initiatives and whether these would be sufficient to overcome the difficulties farmers have attracting local workers.

Advances in technology have brought more automation into fields, including robots capable of picking soft fruits.

Similarly, AI opens up the prospect of digitalising agriculture. In a recent experiment, AI outperformed humans in growing strawberries and offered more return on investment.

However, state of the arts robots and AI are expensive and there are no significant plans to finance this transition to new technologies.

A final option is to accept that food imports will increase. This could be because local produce is no longer competitive based on price, or because the reduction in the available workforce has led to decreases in production.

Relying on food imports would not be a major change, as the UK already imports a substantial share of its food and Britain has a globalised diet that reaches well beyond the limited fruit and vegetables that can be produced on home soil.

Nonetheless, one lesson learned from the Covid-19 pandemic is that domestic food production is an essential component of the nation’s food security.

Seasonal migrants, British farmers and implications of the end of freedom of movement

These four solutions, which could spark debate even in The Archers, should not be taken in isolation.

Farmers will be exploring these possible responses during the next few months as they adjust to the end of freedom of movement.

Their actions will have consequences beyond the farm gate. Businesses such as Varfell Farms provide us with a reminder that seasonal migration has implications not only for migrants and their families, but for British farming and the ecology of rural communities – from the brewery in Kent to strawberry jam produced in Tayside.

This website uses cookies to improve your experience while you navigate through the website. Out of these cookies, the cookies that are categorized as necessary are stored on your browser as they are essential for the working of basic functionalities of the website. We also use third-party cookies that help us analyze and understand how you use this website. These cookies will be stored in your browser only with your consent. You also have the option to opt-out of these cookies. But opting out of some of these cookies may have an effect on your browsing experience.
Necessary Always Enabled
Necessary cookies are absolutely essential for the website to function properly. This category only includes cookies that ensures basic functionalities and security features of the website. These cookies do not store any personal information.
Non-necessary
Any cookies that may not be particularly necessary for the website to function and is used specifically to collect user personal data via analytics, ads, other embedded contents are termed as non-necessary cookies. It is mandatory to procure user consent prior to running these cookies on your website.
SAVE & ACCEPT